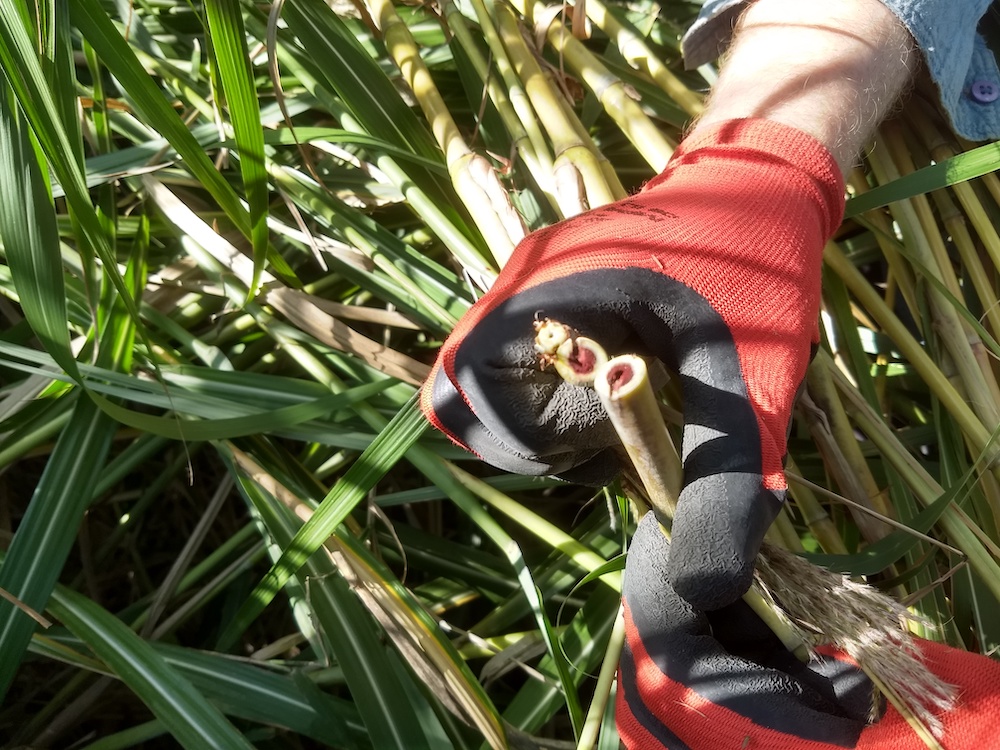 We’ve had reports of some Miscanthus crops with red colouring in them, so our first port of call was to get a diagnosis from Dr Jason Kam, who outlines why it’s good news…

“In some cases, when a living Miscanthus cane is cut open, you may find red colouring inside it.

This is good news and nothing to be worried about. The red colouring is anthocyanin, which shows that the plant is responding to an environmental threat. It means the plant is healthy and fighting off a potential predator, just like a healthy human.

It doesn’t necessarily happen all the time and it could be down to a lot of factors, but I think two factors are the most likely causes:

1) The plant has received a pathological challenge, such as a fungus, bacteria, worm or insect etc, and in response, it has produced secondary metabolite from the flavonoid pathway, which is the anthocyanin responsible for the red colour. This is to combat and or deter the invading pathogen.

The mechanism often functions as an antioxidant that rounds up free radicals in cells, preventing cell destruction and denying nutrients to the invading pathogen. Sometimes, it can produce an unpleasant taste that deters predators. I think this is the most likely scenario because there is red in a very localised place on the images I’ve seen, which is the site of the pathogen/predator.

2) Another explanation would be plants having experienced water deficits, by water supply restriction or senescence.

Part of this “emergency construction” would include the increasing of lignin content that is light brown in colour and red in lower quantity. Lignin has a particular hydrophobic property that also serves as structure cohesion for the plant (i.e. making a good water pipe). This is the plant’s built-in mechanism to maintain water balance during water deficit, or in the case of senescence, despite the shutting down of other cellular functions. It often appears in the vascular bundle forming a ring-like pattern along the stem.

Whatever the exact cause, it is the normal bio-chemical reaction of the crop against field challenges that we would expect the crop to handle. In fact, it is a testament to its resilience.”