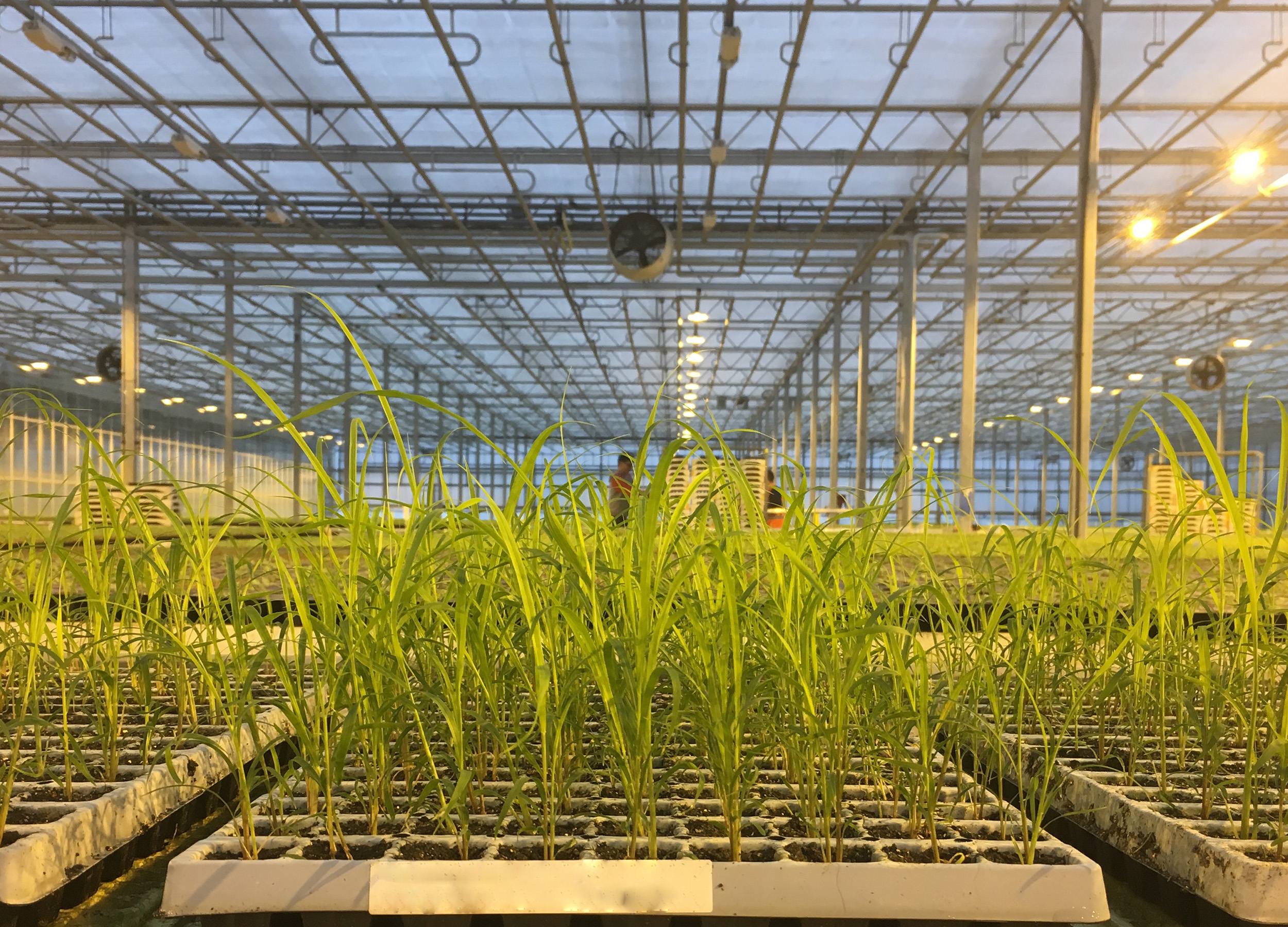 Dr Judith Thornton is a Low Carbon Manager at IBERS, Aberystwyth University and is working with the Miscanthus team. Her main interest is in low carbon, plant-based building materials. She has insulated her house with Miscanthus, and was partly responsible for building the world’s first Miscanthus bale house.

Judith has recently been working on a project reviewing the approach to Miscanthus breeding and considering how it might change to take advantage of recent scientific breakthroughs.

Can you tell us a bit about plant breeding in Aberystwyth?

The Wales Plant Breeding Station was set up in 1919, with the overall aim of reducing the reliance of UK livestock production on imported concentrate feed. We’ve been breeding ever since, and we also have a seed bio-bank, where we store seeds from around 35,000 grasses, clovers and oats. We started breeding Miscanthus about 15 years ago.

Why is it important to develop new Miscanthus varieties?

At the moment, most of the Miscanthus grown in the UK is genetically identical; it comes from a naturally occurring Miscanthus hybrid called Miscanthus giganteus that has been cloned. Whilst giganteus is a great variety, plant breeders are always interested in creating better plants. In the case of Miscanthus, ‘better’ means a range of things. Higher yield and rapid senescence so that moisture content at harvest is lower are both key objectives. The diversity of environments and climates in which Miscanthus is found in the wild also suggest that we should be able to increase its cold and drought tolerance so that we can grow it across a wider range of environments. Giganteus is already well suited to the UK, but there are vast areas of mainland Europe where the plant could yield really well if we incorporated some of these traits into commercial varieties. It’s also the case that diversity of varieties is a key way of reducing the risk of pests and diseases in the long term.

Plant breeding boils down to two basic things. Firstly, a beauty contest where you pick the plants you like the look of. And secondly, plant sex. In terms of the beauty contest bit, just like people, Miscanthus plants don’t develop their full characteristics until they’re older. So we don’t know when the plant is young whether it’s going to turn out to be amazing, or really rather average. We put the plants out in observation nurseries for a couple of years, and take measurements of key features such as number of stems, stem thickness, height, and cell wall composition to see how good they are. The best plants are then used as parents for the next generation.

It depends on the plant! They have different strategies. Miscanthus is a flowering plant that is wind pollinated, so what we need to do is to get the two plants we want to breed from to flower at the same time, so that pollen can be transferred from one plant to the other. Unfortunately, the plants we pick as parents aren’t always in the mood at the same time; there are several different species of Miscanthus we breed from, and because they are used to different temperatures and day lengths in their natural environments, they wouldn’t typically flower at the same time. Consequently we put the plants in specially adapted greenhouses where we can control temperature and day length, and we might also change the amount of water we give them or use a horticultural technique to speed up the maturation of one of the plants or slow the other one down. The aim is to synchronise flowering; we then put the plants in the same glasshouse, and then (hopefully) the magic happens!

How do you see the future of Miscanthus playing out in an ideal world?

The Committee on Climate Change envisages up to around a million hectares of biomass crops in the UK by 2050. Ideally this is a variety of crops, including Miscanthus and willow, and probably some short rotation forestry. The end uses of these crops will likely be different and more varied than today. At the moment our economy is largely based on fossil fuels, but if we fast forward 30 years, far more of our everyday products will need to be made out of plants, because the environmental costs of fossil fuels will just be too high. In the plant based economy of the future, we will probably be quite discerning regarding which particular plants are good for specific end uses; a key feature of Miscanthus is that it is a highly productive perennial with low input requirements so could be used for any purpose requiring large quantities of material (such as energy production and construction materials).

What do you see as the main benefits of growing Miscanthus?

One of the things that is interesting about farmer behaviour is the extent to which they value the freedom to choose a different crop each year; for arable farmers, choosing a perennial crop like Miscanthus is quite a departure from arable rotations, but doing a couple of fields of Miscanthus is a good diversification option and decreases labour requirements. Farmers here in Wales are more comfortable with a particular area of the farm being used for the same purpose for 10 years, and Miscanthus would be an excellent option for animal bedding in order to decrease reliance on cereal straw brought in from England. And the margins are good compared to sheep.