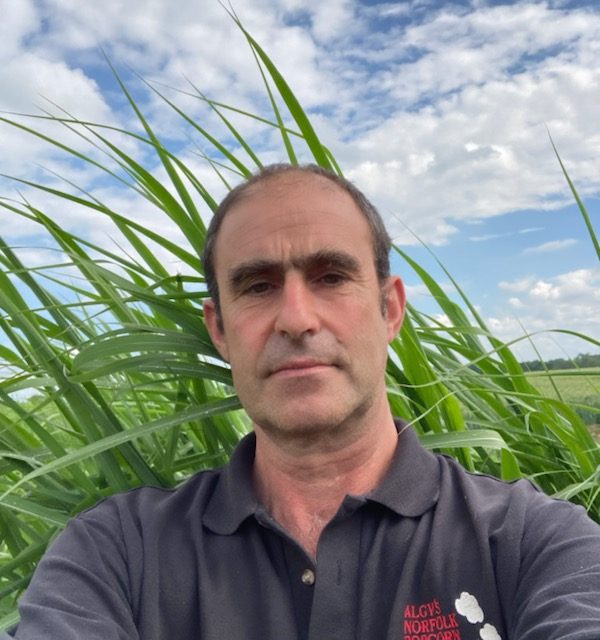 Norfolk arable farmer, Algy Garrod, has introduced a number of measures for risk reduction on his 405-hectare farm, near Fakenham, to future-proof the business. Changes include opening a farm shop, the introduction of more niche vegetable crops to supply the shop, a glamping site, and nine hectares of Miscanthus, with plans to plant more – ‘successful harvest’ depending.

“The Miscanthus is planted on awkward corners of fields, wet areas, and land with heavy soil. By nature, we’re going after the less productive fields to improve the soil. It also means that we are not spending money on those fields, which often struggle to deliver a decent return with arable crops,” says Algy.

Algy has been accepted onto the ELM pilot scheme and is keen that Miscanthus gets some support, as a crop that ticks many environmental boxes. “If there is a % of crop grown on farms, to actively capture carbon, this could be a route to subsidy and would enable us to improve our carbon footprint. Miscanthus could tick that box.

“I’m also very interested in how the carbon market could play out for farmers,” he says.

Algy opened the farm shop in 2005 selling bird seed, since then he has extended it and has applied for planning for a neighboring grain store to extend it significantly. He also grows niche vegetables such as asparagus and pumpkins, and the pumpkins have provided added interest in the autumn, where he opens up the farm for pumpkin picking.

“We also grow Christmas Trees. All this requires an initial investment, but hopefully, it will deliver a long-term income.

“The aim is to replace some of the subsidies with diversification income streams. I’ve been thinking about Miscanthus for a few years before planting five hectares of Terravesta AthenaTM in 2020 and a further four this year,” he says.

“We had to re-plant some of the Miscanthus this year due to last year’s drought. But it’s now looking healthy and we look forward to our first harvest next year,” says Algy.

Algy believes there could be an opportunity to educate children with the Miscanthus. “I hope to use it as an educational tool to show where it grows and how it plays a role in our future.”