We’re excited to introduce our first guest blogger, Dr Judith Thornton, low carbon manager at Aberystwyth University, who is waxing lyrical about using Miscanthus as a construction material to build the first EVER Miscanthus house…

“Straw bale building in the UK has a history of artful and inspired design and has resulted in a small number of iconic buildings, and a much larger number of elegant and understated ones. However, whilst the built form and structural details vary, relatively little attention has been paid to what type of straw is used; the conventional choice in the UK is wheat and sometimes barley. Practitioners tend not to say that one straw type is better than another. It is also quite striking that discussions on choice of bale are almost always about buildability, density and moisture content, as opposed to the plant species it comes from or the implications for long term performance of the building.

But that’s all about to change.

In the early 2000’s, Miscanthus was flagged up as a potential bioenergy crop for Northern Europe, and Defra sent a team of Aberystwyth scientists to Asia to collect genetically distinct specimens that could be crossed with each other to create the ideal biomass crop. Effectively, the mission was to domesticate the crop by combining particular properties and produce a stable, high yielding crop that grows well in the UK and Europe. But why Miscanthus?  Well to start with it has an extraordinary growth rate (some varieties grow a whopping 3-4 metres per year) and a woody hollow stem.  For these reasons it is used in the EU almost entirely as a bioenergy crop, but the key property that makes it interesting for straw bale builders is that it is more resistant to biodegradation than other straw types.

As with wheat and barley, Miscanthus is typically baled in large square Hesston bales for ease of handling and transport. However in 2016, Aberystwyth University asked Terravesta (the UKs leading Miscanthus supply chain company) to produce some small square bales, with the specific intention of trialling their use in buildings. Following successful testing by Bee Rowan of Strawbuild on courses at the Centre for Alternative Technology (CAT) in 2016, the opportunity to use Miscanthus in a real self-build project arose in 2017, which is where the intrepid Steph Robinson takes over the story.

“There were some key considerations for my house build – I wanted a home with a small ecological footprint, I wanted to be able to build it with friends and I wanted a peaceful and healthy place to live.  I saw the build tests by Bee, learnt about the research from Judith at Aberystwyth University and I enjoy spending time in straw bale buildings here at CAT which have such a relaxing quality to them due to the air and sound quality.”

The initial work on the strawbale wall element of the house was done via a CAT course. As is generally the case at the start of a straw bale building course, people are keen to get started, and there’s a certain degree of nervousness and excitement about how things will go. Added to this was some background nervousness about the use of Miscanthus itself. However, this proved unfounded; initial demonstrations by Bee Rowan and Hassan Mzali on the basic processes involved went smoothly and within an hour or so, course participants were confidently placing the first course of bales. By the end of the week, the building was beginning to take shape. 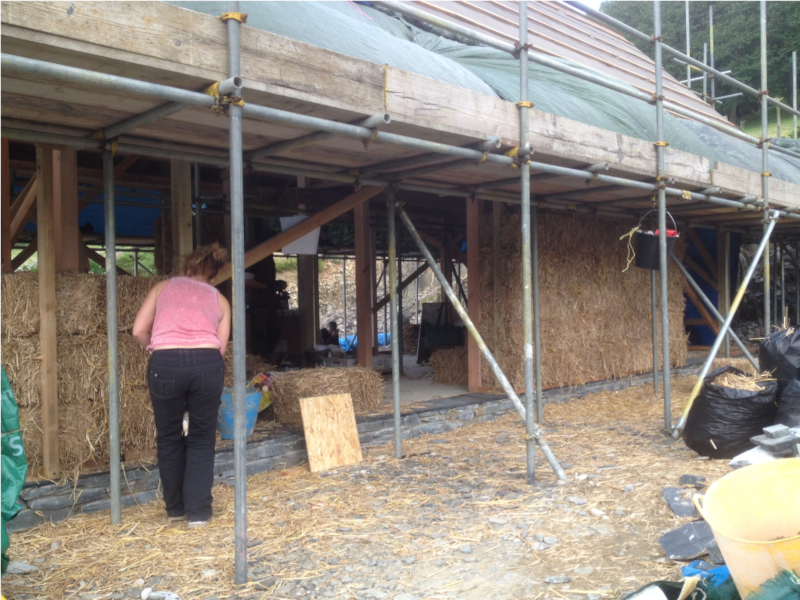 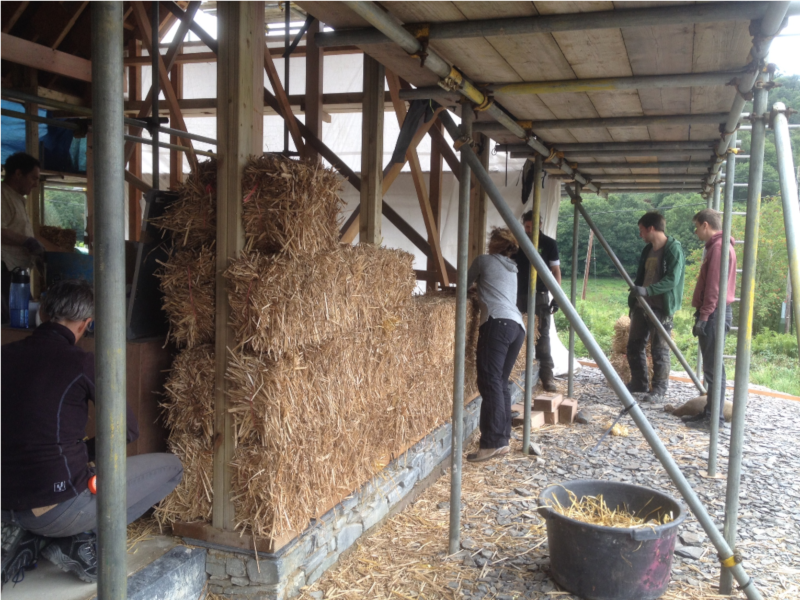 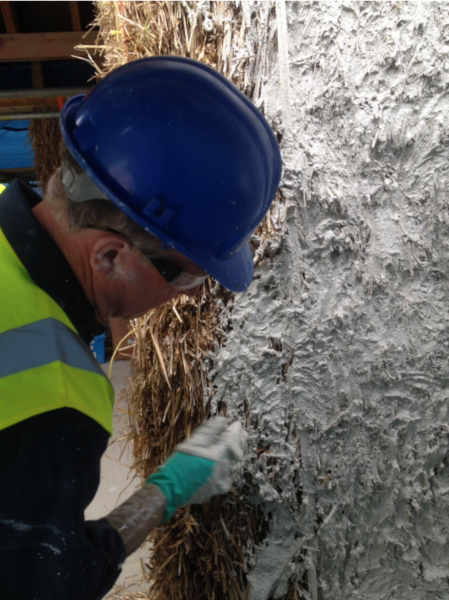 So how well did it work? In most ways, using Miscanthus instead of wheat or barley was completely unremarkable. The bales weighed in at a fairly typical 18.3kg and had a low moisture content (10.7%). They were easy to straighten, cut down to size and dress, and notches were easily cut with an alligator saw. The general construction of the walls proceeded normally, and compression was undertaken without anything unusual happening. There were a couple of key differences compared to most straw bale builds, arising from the intrinsic properties of Miscanthus itself. The first is that it was too rigid to use to stuff gaps or make ‘rats’ for plastering; it has a stiff stem, that makes an audible snapping sound when you try and bend it, unlike wheat or barley which is easy to manipulate. This stiffness also meant that the bales were less pleasant to handle; definitely a case of long sleeves and trousers rather than shorts and T shirts. The third difference also related to stem durability; wall strimming prior to plastering needs a sharp blade operating at high speed (on this project a chainsaw worked well, with the alligator saw proving inadequate). The durability of Miscanthus is not surprising when we think about the biology; the plant has evolved to grow to a height of around 3 metres so needs to be stronger than a wheat or barley stem. The physical arrangement of cells in Miscanthus stems reflects this, and the chemical composition is also different, with Miscanthus having a higher lignin content than wheat straw.

Steph spent a further week finishing off the bale placement, compressing them, and then shaping them with an alligator saw around the openings.  A long weekend followed with lots of volunteers to plaster the walls with clay which adhered well to the miscanthus.

The main reasons straw bale builders have not used Miscanthus before are presumably unfamiliarity and unavailability. However, if it is indeed biologically superior in terms of its resistance to biodegradation, it is perhaps worth considering for future straw bale projects. It is slightly more difficult to build with, but if the performance is better, this is perhaps a small price to pay. So the last word goes to Steph

“It is comforting to know that the bales are far more resistant to composting than straw when you live somewhere as wet as Wales.  The period of time it took to build with the bales was just a few weeks but hopefully the life of the building will be over 200 years.”

Judith Thornton works as part of the BEACON project which is supported by the European Regional Development Fund, through the Welsh Government. Her original blog post can be found here.”